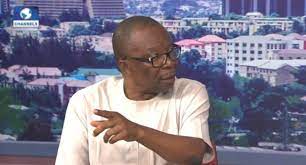 FastNews reports that professor Emmanuel Osodeke, the president of the Academic Staff Union of Universities, said on Wednesday that Nigerian students shouldn’t vote for politicians whose kids are enrolled in schools abroad.

Osodeke was speaking during a Twitter Space Webinar titled “ASUU strike, Revitalization Fund, and the Way Forward” and hosted by Premium Times.

Speaking on some of the way forwards on the lingering strike, he said students should not vote for politicians who would not represent their interests.

Osodeke was responding to question from a popular ENDSARS activist, Rinu Oduala, on what Nigerian students could do amid the lingering ASUU strike.

The PUNCH reports that ASUU has been on strike since February 14, 2022, with hopes on resumption dashed for Nigerian students many times as the lecturers have refused to resume over what they described as the failure of the Federal Government to honour the agreement it had with them.

The PUNCH also reported that ASUU’s meeting with the FG ended in deadlock, Tuesday. Sources familiar with the matter told one of our correspondents that the Federal Government’s team met with the representatives of ASUU at the headquarters of the National Universities Commission.

Speaking further, the union’s President bemoaned comments by the Ebonyi State Governor and Chairman of South-East Governors’ Forum, David Umahi, that university education was not for everybody.

This was as Umahi stressed that it was unreasonable for the Federal Government, led by the President, Major-General Muhammadu Buhari (retd.), to borrow over N1trn to meet the demands of ASUU.

Speaking further on on Twitter, Osodeke said, “Education is about life. A governor was saying education is not for everybody and then we saw his son graduating outside (abroad) with governors around. I will repeat it, the Nigerian students should hold their PVC. Anybody who will not look at their interests, who, in his campaign, will not show that he’s going to improve the Nigerian educational system, they should vote them out.”