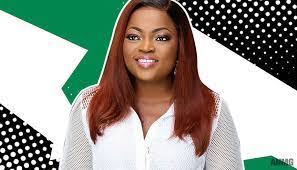 FastNews reports that the People’s Democratic Party (PDP) in Lagos State is officially considering Funke Akindele, better known by her stage name Jenifa, for the position of deputy governor in the 2023 elections. She is a well-known Nollywood actress.

Gbenga Ogunleye, the media assistant for Olajide Adediran (Jandor), the PDP candidate for governor of Lagos State, verified this on Friday.

You may recall that Naija News reported earlier on Tuesday that Funke Akindele may run as the People’s Democratic Party’s candidate for governor based on a campaign poster that appeared online.

Confirming the possibility, Ogunleye told The Cable that the actress is one of the names shortlisted for the position however no final running mate to the PDP governorship candidate for the 2023 elections has been selected yet.

He added that Akindele was nominated alongside four others whom he listed as Gbadebo Rhodes-Vivour, Kolawole Vaughan, Adenike Shobajo and [Rasheed] Teslim-Balogun.

“She was nominated alongside four other people, whose names are Gbadebo Rhodes-Vivour, Kolawole Vaughan, Adenike Shobajo and [Rasheed] Teslim-Balogun. Jandor has not named anyone as his running mate yet,” he added.

The Lagos State governorship election is scheduled for March 11, 2023.