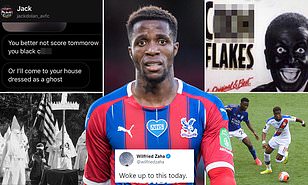 Wilfried Zaha has revealed sickening racist abuse he has received ahead of Crystal Palace’s trip to Aston Villa.

Eagles star Zaha posted a series of screenshots sent to him an Instagram account ‘jackdolan_avfc’ underneath the caption ‘woke up to this today.’

In two vile messages Zaha was told ‘you better not score tomorrow you black c***’ before the poster added ‘or I’ll come to your house dressed as a ghost.’

The poster also sent an picture of a Ku Klux Klan gathering, to underline the threat, and another displaying an edited version of a box of cornflakes, instead carrying the words ‘c***flakes’ and displaying a man with his face blacked up.

The Premier League are investigating the incident as part of their discriminatory abuse system.

Palace manager Roy Hodgson said: ‘I think it’s important [that players and football clubs continue to raise awareness of the abuse suffered]. I think it is being highlighted very much anyway with the black lives matter movement, and everyone seems to be making such an effort to eradicate this type of behaviour.

‘It is very saddening on the day of a game that a player wakes up to this cowardly and despicable abuse.

‘I think it is right that Wilf made people aware of it; I don’t think it is something he should keep quiet about.

‘I think it is very good that our club, Aston Villa and the Premier League are doing everything they can to find out who this despicable individual is and one can only hope that they will get identified and they will get called to account and they will pay for these actions.

‘There is literally no excuse; there is no excuse at all.’

West Midlands Police wrote on twitter: ‘Hi Wilfried. We are looking into who the owner of this account is and would encourage you to report it to your local police force too.’

The incident is just the latest to be highlighted this season involving players past and present receiving horrific racist messages on social media.

The system is also available to coaches, managers and family members and the league could pursue legal action on the behalf of any recipient.

Crystal Palace tweeted their disgust at the abuse received by their star player ahead of their trip to Villa Park.

‘This is an absolute disgrace and should not be happening,’ a club tweet stated.

‘We stand with you, Wilf, and anyone else who has to suffer such horrific abuse.’

A number of fans – many with Chelsea-related avatars and usernames – branded the England striker ‘Apebraham’ on social media.

It appears Twitter however took swift action with many of the accounts, deleting the tweets.

The abuse also arrives amid comments from England’s first black senior player Viv Anderson, who claimed that racism has made its way back into football.

The former Nottingham Forest, Arsenal and Manchester United defender was also extremely critical of the punishments handed out to fans who hurl vile abuse, labelling them ‘pathetic’ and ‘ridiculous’.

‘If you said to one of the associations ‘well the fine is £6million’, I think they would get people out of that stadium very quickly. They wouldn’t be welcomed back.

‘I think the fines have got to be more substantial. You’ve got to make a point that it’s not acceptable in 2020.’

Since the tragic events in Minneapolis, all Premier League matches have seen players take the knee before kick-off in solidarity with the black community.Emile Heskey says racism in football was ‘brushed off as banter’