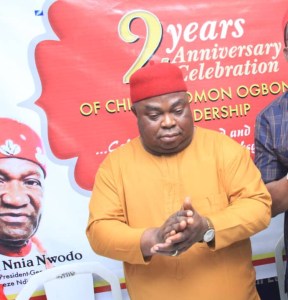 The President of Ohanaeze, Lagos Chapter, Chief Solomon Ogbonna, has suffered serious set back following the demand by the Igbo traditional rulers in diaspora led by the respected Eze Ndigbo in Ikeja, Eze Uche Dimgba, for his investigation and removal over the alleged certificate scam.

P.M.EXPRESS reports that the decision by the traditional rulers also known as Ndi Eze na Uzo Ije (meaning Eze in Diaspora) has closed the issue of the lies by the faceless group, known as Igbo Elders Council led by Chief Oliver Akubueze, who stated that the office of the President of Ohanaeze Ndigbo does not require any certificate.

In a letter dated 24th December, 2019, addressed to the President General of Ohanaeze Ndigbo worldwide, Chief John Nwodo, signed by Eze Dimgba as Chairman and General Secretary of the group, Eze Pat Ene, it stated that they want to restore the integrity of the respected office of the President of Ohanaeze.

The letter reads:
Dear Sir,RE:EFFORTS OF CHIEF DAMIEN OKEKE,CHIEF EVEREST OZONWEKE,CHIEF ERIC EBEH AND OTHERS TO FRUSTRATE THE DECISION OF THE NATIONAL EXECUTIVE COMMITTEE TO INVESTIGATE THE NON QUALIFICATION OF OGBONNNAYA NWINYINYA, AKA SOLOMON OGBONNA AGUENE AS OHANAEZE NDIGBO LAGOS PRESIDENT
We are members of Ndi Eze Udo Na Uzo Ije and Title Holders Association, Lagos State and on the strength of the above write in respect of the above subject matter.
It is our complaint that Chief Damien Okeke, the President of Ohanaeze, Anambra State in conjunction with others, is working with Ogbonna Nwinyinya(Chief Solomon Ogbonna Aguene) to sabotage the decisions of the National Executive Committee of the Ohanaeze Ndigbo Lagos Chapter.
Recently, Chief Damien Okeke travelled to the United States of America (USA) and on his way back, he stopped over in Lagos and held meeting with Chief Everest Ozonweke, the Secretary of Ohanaeze Ndigbo, Lagos Chapter and Chief Damien Okoye, the treasurer of Ohanaeze Ndigbo Lagos, who is also his kinsman, both from Nanka, Anambra State.The meeting was held at New Planet Hotel, Ojo, Lagos and was prior to the peace meeting held in your office in Enugu on 8th October, 2019.

The purpose of the meeting was to ensure that whatever decision taken at the Enugu meeting which affected Mr. Ogbonnaya Nwinyinya as the President of Ohanaeze Ndigbo Lagos Chapter will not work.On the strength of the meeting, Chief Eric Ebeh, the Deputy National Treasurer of Ohanaeze Ndigbo and Secretary of the electoral committee, Lagos, conspired with others and collected the sum of N300,000 (Three hundred thousand Naira only) each from Ogbonna Nwinyinya and in consequence counseled him to manufacture, produce and submit a fake Senior Secondary School Certificate Examination (SSCE OR GCE).The above is to counter the decision of the National Executive Committee, which mandated him to submit to your office his SSCE certificate within three (3)weeks.

They assured him that they will ensure that the National Executive Committee will not investigate the authenticity of the certificate.You will recall that by an application dated 28 May, 2019, Chief John Uche applied for photocopies of the forms and documents used for the conduct of the Ohanaeze Ndigbo Lagos 2018 election.However, these documents were not availed to Chief John Uche because Chief Eric Ebeh blocked it having collected the sum of N600,000(Six hundred thousand Naira only) from Mr Ogbonnaya Nwinyinya.

Let us make it very clear that we have no special interest in the affairs of Ohanaeze Ndigbo Lagos. However, as elders, we are concerned about the sanctity of the office of its President and will do anything within our powers to ensure that sanctity is a part and parcel of the office. On this note, we state that if there is an allegation of fraud against the occupier of the office and which the National Executive Committee has taken over its investigation, we advise that the investigation should be completed and verdict rendered. We should not allow selfish individuals to truncate the process.