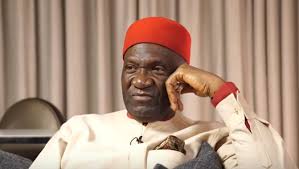 There is a common saying that the Igbo have no king (Igbo enwe eze). This adage is used to depict the individual nature of the Igbo man who does not owe allegiance to only one man. Hence it is common to have cacophony of voices addressing Igbo issues without a unified voice.

For long, the umbrella organisation for all Igbo groups, Ohanaeze Ndigbo, has held sway, addressing the Igbo question with an appreciable percentage of the people listening to the group.

But recently, a voice of dissent arose from a monarch in Anambra State. He challenged the Ohanaeze leadership by attempting to register a new Ohanaeze and installing a new leadership.

This splinter group of Ohanaeze, led by the traditional ruler of Igbariam in Anambra East Local Government Area, Igwe Nkeli Nzekwe, had inaugurated the new group in his palace and described himself as the Chairman of Board of Trustees of Ohanaeze Worldwide.

He claimed Ohanaeze had become a legal personality that could sue and be sued and no longer a self-serving platform, adding that, henceforth, the new leadership would pilot the affairs of the Igbo organization to the exclusion of anybody in the saddle before the incorporation of the group.

“Today (Sunday), I welcome the newly inaugurated members of the National Executive Council of Ohanaeze Ndigbo General Assembly Worldwide led by Basil Onyeachonam”, he had said.

“As the Chairman Board of Trustees of the organization, I call on Ndigbo all over the world to join hands together and make Ohanaeze great again.

“I am one of the founding members of Ohanaeze Ndigbo in 1976. After the Nigerian Civil War, I and some Igbo patriots came together to discuss the way forward for Ndigbo with the good intention to unite our people under a common umbrella body.

“This initiative was welcomed by our people considering the maximum displacement of Ndigbo during the war and its aftermath. Our principal aim then was specifically to unite Ndigbo and speak with one voice.

“It was unfortunate that the organisation later lost its principal focus and became a political tool in the hands of some greedy politicians which created room for the formation of several Igbo organizations due to lack of confidence in the affairs of Ohanaeze.

“On November 25, 2019, some notable Igbo stakeholders visited my palace to discuss the way forward on how to restructure Ohanaeze Ndigbo and give it a corporate legal status instead of merely existing as a pressure group and a political tool in the hands of few individuals.

“Throughout the 44 years of the existence of the apex Igbo group, it was neither registered at the Corporate Affairs Commission nor recognised by some notable international bodies as a corporate personality.”

Ever since this alleged inauguration, the leadership of the Igbo has not known sleep. Arguments and counter-arguments have pervaded the polity and bringing up all kinds of issues affecting the Igbo.

Despite the deregistration of the splinter group by the Corporate Affairs Commission, the new group is still holding unto their registration, claiming no such thing happened.

The development has created room for many to look critically into the activities of the Nwodo-led Ohanaeze and its shortcomings, even as the group expresses confidence that all is well.

However, the splinter group is of the opinion that things have to be done differently for the fortune of the Igbo to change. To observers, Igbo have refused to forge a common front politically unlike what is obtainable in other major ethnic groups in Nigeria.