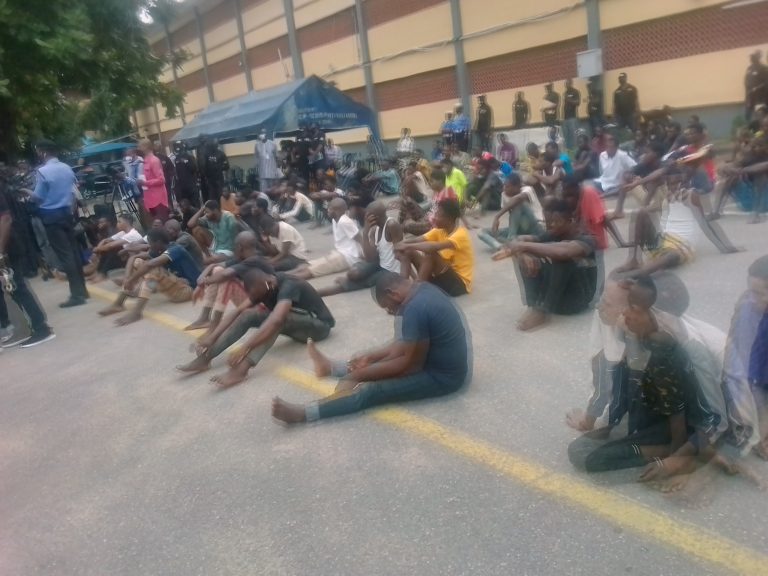 It was indeed a battle for supremacy between the Nigeria Police and criminal elements after some operatives from SARS escaped death when they went to interrupt suspected armed robbers and cultists, who were having meeting over their next line of banditry in Ikorodu area of Lagos.

P.M.EXPRESS reports that the suspects engaged the officers in a fierce gun battle that lasted for several hours before the Police suppressed and eventually arrested two of the suspects while others escaped and now at large. The Police also recovered arms as exhibits.

This was disclosed by the Commissioner of Police, Lagos Command, CP Hakeem Odumosu, who paraded the suspects with other criminal elements arrested across the State.

He said that on 18th June, 2020, at about 1200hrs, information received from a credible source revealed that some armed men were sighted holding unlawful meeting around Ginti area of Ijede-Ikorodu, Lagos.

On receipt of the information, SARS operatives, Ipakodo Base, swiftly mobilized to the scene. On sighting the operatives, the armed men opened fire on them. The operatives engaged them and succeeded in arresting two of the suspects namely; Seun Alabi ‘m’ 30, and Rilwan Yesufu ‘m’ 27. One cut to size locally made pistol with three live cartridges, cutlass and charms were recovered from them.

The Police boss revealed that the suspects were both cultists and robbers terrorizing residents of Ijede-Ikorodu and its environs and had been on the Police wanted list until they ran out of luck. He said that other gang members now at large will be soon be arrested as the Police have intensified efforts to track them in their hideout and thereafter the suspects will be charged to Court after the conclusion of the investigations.

During the parade at the Command Headquarters in Ikeja, Lagos, other suspects who committed various offences including kidnappers, traffic robbers, rapists and fraudsters, who were arrested across the State were shown to the media.

CP Odumosu used the opportunity to warn criminals that they do not have any hiding place in Lagos State.