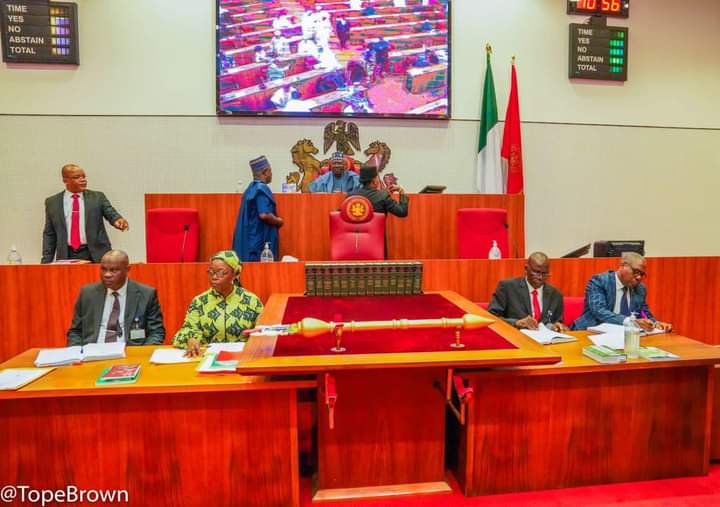 A Matter Of Urgency Was Presented By Senator Uche Ekwunife

The attack on Senator Dr. Ifeanyi Ubah and the horrific murder of his aides are of public importance.

Senator Ifeanyi Ubah was attacked and his staff members were brutally murdered, and the senator who was subject to POINT OF ORDER 41 and 51 sought leave of the Senate to address the case.

In her contribution to the motion, Senator Biodun Olujimi had the following to say “I rise to add my voice to what my earlier colleague who seconded said about this dastardly act. When we heard it, we thought it was a joke because we cannot imagine in broad daylight such a disaster would happen. We need to look deeper into the problem of insecurity. We still must do a lot more because for this to happen in broad daylight to a man who has a convoy with more than six cars, you can imagine what can happen to an individual who drives a single car. We must know those who are perpetrating such ugly incidents in our country. I lend my condolences to Senator Ifeanyi Uba and I pray that this will abate.” –

“Let me join In commending Senator Uche Ekwunife for bringing this motion. Ordinarily, I would have expected the motion to be brought by Senator Ifeanyi Ubah himself but I would take that back having seen the trauma and pain looking into the eyes of our colleague. As bad as it is, we must thank God for the life of our brother and our colleague. We thank God for saving him. As alluded to in the motion, this is not the first time we are dealing with the gruesome attack and killing in Anambra State no arrest is being made and no prosecution has commenced and we are worried. All Nigerians should be interested and we should all contribute our quota in providing security for our people. What is wrong for a state government like Anambra State after the killing of a member of the State House of Assembly to make some investment in the acquisition of security equipment? We should encourage our State Governors that they should not see security as an exclusive preserve of the Nigeria Police and that they should rise to the situation. I extend my condolences to the families of the five people who lost their lives in this attack.” – Deputy Senate President, Senator Ovie Omo-Agege

In his contribution, Senator Emmanuel Bwacha said as follows

“I want to congratulate our Colleague for surviving that terrible attack. I agree with the Deputy Senate President that the level of insecurity we have in this country demands that all hands must be on deck. Those who are supposed to do the needful should rise and do it. Some of the Governors need to do more. Let those who are involved in handling securities of communities and states wake up to their responsibilities. May God help Nigeria in this dangerous situation.” –

“I want to join my colleagues to make condolences. Some people have become conflict entrepreneurs who are utilizing the security situation to unleash mayhem. I join the Deputy Senate President to continue to ask the security agencies to do much more than they are doing.” – Senator Enyinnaya Abaribe

According to the Senate President, Ahmed Lawan.

” I know what my friend and brother, Senator Ubah is passing through having survived an attempt on my life in 2008 in which I lost a policeman attached to me. Every hand must be on deck to fish out the perpetrators of this dastardly act “.

Other Senators like Senator Obinna Ogba( PDP Ebonyi State ) also added their voices in commiserating with the Prince of the Senate, Senator Dr. Ifeanyi Ubah

The Senate after the contributions by the members resolved to:

i. Observe a minute of silence in honor of the victims that lost their lives in the unfortunate attack;

ii. Direct the Nigeria Police Force, Department of State Services, and other relevant security agencies to carry out comprehensive investigations into the incident to arrest and prosecute the perpetrators; and