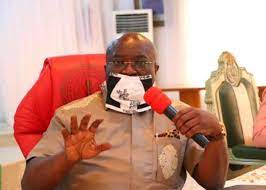 For each murdered cattle trader in Abia, the state would pay N2 million.

Following the killing of nine people at a cattle market, the Abia State Government sent a delegation to Gombe State on Monday to express condolences to the families of the victims.

Seven of the victims, who were killed by hoodlums, were claimed to be Gombe State natives.

According to Yahuza Yusuf, interim President of the Cattle Dealers Association of Nigeria, no administration from the southern part of the country has shown sympathy for a body like Abia State Governor Okezie Ikpeazu.

He disclosed that the governor, who made it clear that he could not compensate for the lives lost, promised N2 million naira each to the families of the deceased, which had yet to be redeemed, adding that about N150,000 had been provided.

“We asked him (Ikpeazu) to pay for our damages and he said he couldn’t pay for all our damages, but he gave us N150,000 as the worth of each cow and he promised to support the affected families to survive and additional N2m to the families, but that has yet to be paid,” Yusuf stated.

He also revealed that the association went to Abia State to bring back surviving members, noting that Ikpeazu objected to the decision.

“The governor said the people were under his care; he gave us good attention and we stayed with him for more than three hours. That is the only governor who did that to us since all these things happened in the South,” Yusuf added.

On his part, the representative of the governor and paramount ruler of Abriba, Kalu Ogbu, expressed sadness over the killings.

Ogbu stated, “I’m here to extend our sympathy and condolences to the people and the government of Abia State. The incident is sad and I don’t know how to explain it. There is no word to explain what happened as it was the handiwork of misguided fellows.

“Thank God that our governor has taken up the responsibility to make sure that those behind it are caught to face the full wrath of the law.”