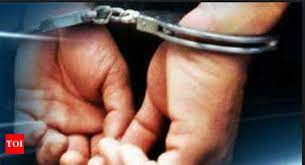 A father is said to have impregnated his 14-year-old daughter.

FastNews reports that Baridap Needman, 38, was arrested by police in Yenagoa, the Bayelsa state capital, for allegedly impregnating his 14-year-old biological daughter.

Gender Response Initiative Team (GRIT), led by Dise Ogbise Esq, made a formal complaint to the police, which resulted in the arrest of the suspect, who is from Ogani Wily Kaira Community in Ogoni, Rivers State.

According to Ogbise, the GRIT was tipped off by a concerned neighbor who noticed that the victim was five months pregnant and that the father was the father.

According to Nigerian Tribune, the accused father went on to replace his deceased wife with his daughter on his matrimonial bed. While the 14-year-old girl who was in Junior Secondary School 3, was sleeping with the father on the bed, her two younger brothers were made to sleep on the floor.

However, policemen at the Ekeki Police Station, where the case was reported, were shocked when the pregnant 14-year-old declared that she was in love with her accused father.

The Chairperson of the GRIT, however, told newsmen that the advocacy group in collaboration with the Ministry of Women Affairs would offer psycho-social support to the victim and ensure that she is well taken care of until delivery.

“Abortion is not an option and the two brothers have been handed to their family member for proper care. The Girl will be in government custody and she needs to go back to school. Her dream is to be a musician and we will encourage her” she explained.