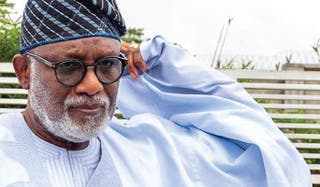 Akeredolu: Soludo’s Economist Experience Is a Great Asset to Anambra.

FastNews reports that Rotimi Akeredolu, Governor of Ondo State and Chairman of the Southern Governors’ Forum, has congratulated Anambra State Governor-elect Chukwuma Soludo, saying the latter’s experience as an economist will be a great asset to the state.

This was stated by Akeredolu in a statement signed by Ondo State Commissioner for Information and Orientation, Donald Ojogo.

According to the PUNCH, the Independent National Electoral Commission declared Soludo, a former governor of the Central Bank of Nigeria, the winner of the Anambra election held on November 6.

In the statement titled, ‘Southern Governors’ Forum Congratulates Anambra State Governor-elect, Soludo’, Akeredolu commended the Anambra people for their participation while charging Soludo to brace up for the task ahead.

Akeredolu also stated that the SGF looked forward to working with Soludo in the fight against security and economic challenges bemoaning the region.

“We look forward to working with Prof. Charles Soludo under the auspices of the Southern Governors’ Forum, for the peace, security, and development of Anambra State, Southern Nigeria, and the country at large,” the statement quoted Akeredolu as saying.

He continued, “No doubt, we will be happy to explore the experience of the Governor-elect, as it relates to the economy and also helps in our efforts to keep the people of Southern Nigeria safe.

“Prof Soludo’s experience as a consummate economist will be of great asset to the good people of Anambra, Southern Governors’ Forum, and indeed the entire country. Our efforts towards economic integration and enhanced socio-economic relationships in the SGF will undoubtedly be boosted in many respects.

“On behalf of my colleagues in the SGF, I congratulate Prof. Soludo and wish him the best as he prepares for the herculean task ahead.”