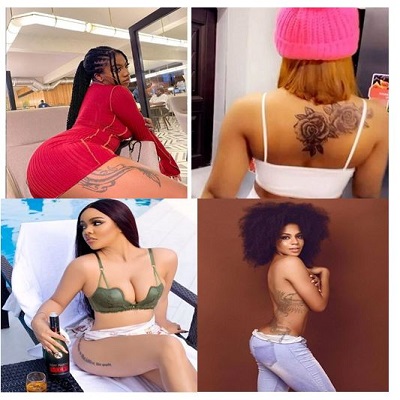 Fastnews Nigeria reports that body tattoo has become a norm in most developed countries as more people keep embracing the idea because of its aesthetics as well as what it signifies and it’s special reasons behind having it.

So many people had special tattoos because of what it represents in their life or as a remembrance of something special.

Below are four Big Brother Naija female reality stars with special tattoos and the meaning behind them:

Mercy was the winner of the Big Brother Naija in 2019 tagged “Pepper Dem Gang” who has lovely and special flower and written words tattoos on her body. The most meaningful tattoo on her body is the large rose flower on her back.

According to websites showing the meaning of tattoos online, the rose tattoo can represent remembrance of a loved one, beauty, innocence and love.

Angel is a housemate in the ongoing season of the Big Brother Naija tagged “Shine Ya Eye’. The 21 years old reportedly have 11 tattoos all over her body. While the other tattoos are not very visible to tell their meaning, the huge one on her thigh is a dragon.

According to the Japanese and Chinese culture where the dragon tattoo originated, the meaning stands for good luck, protection of home and family, wisdom, peace, strength and power.

Nengi, who emerged third in the 2020 ‘lockdown’ edition, has tattoos on her body and on her ankle. The most meaningful one is the one on her thigh written in the Russian language.

According to reports, the Russian text means “Never make the same mistake twice”.

The 2019 edition contestant has multiple meaningful tattoos on her body. On her lower back, she has a large tattoo of an eagle which represents power, dominance, freedom, luck, clarity, focus, spirituality, and known as the enemy of evil.

On her hand, she tattooed the first letters of her name with a queen crown on top of it.