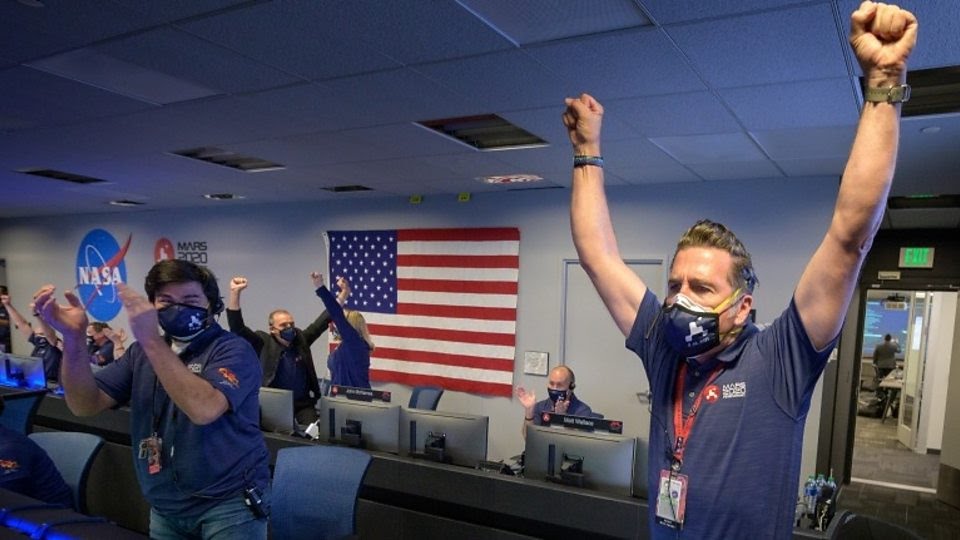 Fastnews Nigeria reports about the Nasa Perseverance rover that landed on Mars.

“Touchdown confirmed”: Watch the moment the Nasa Perseverance rover landed on Mars.
There’s a new robot on the surface of Mars.

The American space agency has successfully landed its Perseverance rover in a deep crater near the planet’s equator called Jezero.

“The good news is the spacecraft, I think, is in great shape,” said Matt Wallace, the mission’s deputy project manager.

Engineers at Nasa’s mission control in California erupted with joy when the confirmation of touchdown came through.

The six-wheeled vehicle will now spend at least the next two years drilling into the local rocks, looking for evidence of past life.

Jezero is thought to have held a giant lake billions of years ago. And where there’s been water, there’s the possibility there might also have been life.

Key questions about Nasa’s Mars rover
How Perseverance will search for signs of life
Image copyrightNASA
Image captionThe first picture looks forward. The shadow comes from the rover’s robotic arm
The signal alerting controllers that Perseverance was down and safe arrived at 20:55 GMT. In the past they might have hugged and high-fived but strict coronavirus protocols meant they had all been separated by Perspex screens. A respectful fist bump was about all they could manage.

Nonetheless, the excitement was evident. And the applause continued when the first two images came in. They were taken by low-resolution engineering cameras. There was dust covering the still-attached translucent lens covers, but it was possible to see a flat surface both in front and behind the rover.

Post-landing analysis indicated the vehicle had come down about 2km to the south east of the delta feature in Jezero that Perseverance plans to investigate.

“We are in a nice flat spot. The vehicle is only tilted by about 1.2 degrees,” said Allen Chen, who led the landing team. “So we did successfully find that parking lot and have a safe rover on the ground. And I couldn’t be more proud of my team for doing that.”

Steve Jurczyk, the acting administrator at Nasa, also saluted the achievement: “What a credit to the team. Just what an amazing team to work through all the adversity and all the challenges that go with landing a rover on Mars, plus the challenges of Covid. Just an amazing accomplishment.”

And Mike Watkins, the director of Nasa’s Jet Propulsion Laboratory, the home of the agency’s Mars missions, added: “There is something special about the first few days (of the mission) because we have just landed a representative of Planet Earth on a place on Mars that no-one has ever been to.”

UAE space mission returns first image of Mars
The camera capturing Mars’ craters and canyons
Nasa’s Perseverance rover is bearing down on Mars
Image copyrightNASA/JPL-CALTECH
Image captionOne tonne of high technology: Seven instruments, multiple cameras, microphones and a big drill
Landing on Mars is never easy, and even though Nasa has become expert at it, everyone on the Perseverance team had spoken with great caution going into Thursday.

This is the second one-tonne rover put on Mars by the US space agency.

The first, Curiosity, was landed in a different crater in 2012. It trialled innovative descent technologies, including a rocket-powered cradle, that Perseverance has also now put to good effect.

Controllers will spend the coming days commissioning the new rover, checking whether any of its systems were damaged in what would have been a rough ride to the ground.

Perseverance’s mast, with its main camera system, must be raised. The software that got the vehicle to Mars’s surface must now be exchanged for a software system that enables the robot to drive across that surface.

Above all, expect Perseverance to take many pictures in the next week or so as engineers and scientists seek to assess the nature of the nearby terrain.
Image captionTOP: The rover touched down about 2km from the targeted delta feature in Jezero. BOTTOM: The rover’s onboard computers successfully diverted the landing to the smoothest ground (blue) and avoided more hazardous ground (red)
One near-term objective will be to run a helicopter experiment. Perseverance carried with it a mini-chopper that will attempt to make the first powered flight in another world – what might be described as a “Wright Brothers moment” for Mars.

Only after this will the robot get on with the serious business of its mission. It will head to that vast delta feature detected by satellites.

Deltas are built by rivers as they push out into a wider body of water and dump their sediment. Scientists are hoping that incorporated into the material that built Jezero’s delta are the tell-tale signatures of past biology.

Perseverance will sample the base of the delta and then move towards the rim of the crater. It’s at the rim that satellites have detected carbonate rocks, which on Earth are particularly good at trapping biological activity.

Perseverance has a suite of instruments that will examine all these formations in detail, down to the microscopic level.

Why is Jezero Crater so interesting?
Forty-five-km-wide Jezero displays multiple rock types, including clays and carbonates, that have the potential to preserve the type of organic molecules that would hint at life’s bygone existence.

Particularly enticing is the “bathtub ring” of sediments laid down at what would have been the ancient lake’s shoreline. It’s here that Perseverance could find what on Earth are called stromatolites.

“In some lakes you can get microbial mats and carbonates interacting to form these big structures, these large layered mounds,” explained science team-member Dr Briony Horgan from Purdue University in West Lafayette, Indiana.

“If we see anything like that kind of structure in Jezero, we’ll be making a beeline straight for it because that could be the holy grail of Mars astrobiology,” she told BBC News.

Perseverance’s most interesting rock finds will be packaged into small tubes to be left on the surface.

Nasa and the European Space Agency (Esa) have devised a multi-billion-dollar plan to go fetch these cylinders towards the end of the decade.

It will be a complex endeavour involving a second rover, a Mars rocket and a huge satellite to ship the Jezero materials home.

Returning samples is the logical – and necessary – next step in Mars exploration.

Even if Perseverance discovers something that looks like a bio-signature, the evidence is almost certain to be contested – as claims for ancient life’s traces here on Earth usually are.

Bringing rocks back for further, more sophisticated analysis is therefore likely to be the only way any arguments about past biology on the Red Planet will be settled.