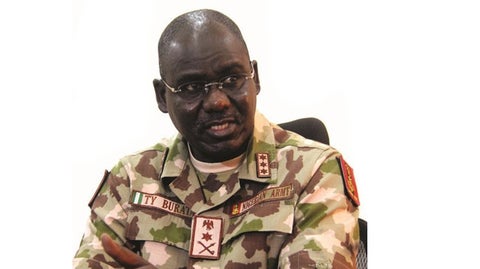 A recent analysis of the situation in the Lake Chad frontlines indicates that ISWAP, a breakaway arm of the Boko Haram are enmeshed in bloody leadership tussle which had led to the change of guard in the group’s commandership.

EONS Intelligence, a Nigerian online news media, gave a cursory anatomisation of the situation around the Lake Chad and Sambisa axis which provided insights to why the Nigerian troops may have suffered series of deadly assaults in the hands of the relentless terrorists.,

Interestingly, many have observed that the twin terror group have been reacting to the recent mass killings of their members and top commanders during the days that Nigeria’s Chief of Army Staff ,Lieutenant General Tukur Buratai, took the lead in the ‘fight to finish’ with the Boko Haram and ISWAP groupings.

The army chief of Staff had informed Nigerians that not less than a thousand terrorists had been killed when he joined the troops in the jungles of Sambisa and the Tumbuls of the Lake Chad.

It is being said that disgruntled ISWAP members who suffered most of the casualty in the attacks by Nigerian troops have blamed the mass loss of their commanders and key fighters on the incapabilities of their erstwhile leader, Amir Abba Gana.

The EONS Intelligence’s analysis said the Shura Council of ISWAP accused Amir Abba Gana of weakness and “failure to command and control” their operations. As such, he was deposed and detained.

A new Amir, considered to be more vicious, Amir Ba’ Lawan came in as the replacement of Mr Abba Gana.

Amir Ba’ Lawan, who hails from one of the riparian communities of the Lake Chad was the former Deputy Commander to Abba Gana.

The former deposed ISWAP leader, Abu Musab Albarnawi, who was also the first Amir of ISWAP when the group split in March 2015, is said to have been favoured by this latest leadership crisis and the subsequent Shura Council backed coup that elevated Amir Ba’ Lawan to the overall commandership of the deadly group.

The Humanitarian Times gathered that with the approval of Ba’ Lawan, the Shura Council “restored” Abu Musab Albarnawi into the cabal circle to function as “strategy/ operational adviser.”

His new rank gives him the latitude to wield enormous influence as “one of the most powerful commanders to ISWAP alongside Ba Lawan.”

EONS Intelligence assumed that Abu Musab was brought into the mainstream with the motive of sustaining recognition and support “from ISIS core leadership and the AZWAJ sponsors linked to Regional jihadist in Mali and Libya. Habib is said to have a special relationship with Ba Lawan.”

Besides that assumption, Abu Musab, being the son of the founder and spiritual leader of the movement that eventually transmutes to the present-day JAS and ISWAP, is still respected by those that worked closely with his father, Sheik Muhammed Yusuf died in July 2009. He is also adjudged to be knowledgeable in the Quran and has fluency in Arabic.

Many opinions believe that Albarnawi may have masterminded the recent bloody operations that led to the mass killing of Nigerian soldiers, including the twin attacks of Damboa.

During the Buratai-led two months of attacks on critical hideouts of ISWAP and Boko Haram, the two terror groups suffered a massive loss of their fighters.

As such, to shore up the ranks of their fighters, and to match with the fighting forces of the Nigerian troops, EONs Intelligence said the new ISWAP leadership under the strategic advise of Albarnawi embarked on conscription and training of child soldiers, “some as young as 13 years”, in the Tumbus of Lake Chad.

Albarnawi had, through the diehard young fighters, been able to replenish the decimated force of the ISWAP.

The Humanitarian Times has also gathered from impeccable sources who have been spying on the operations of the terrorists that Albarnawi was the brain behind the collaborative attack that ISWAP seemed to be having with the Libya-based AZWAJ.

According to EONS Intelligence, sources say “there is a higher possibility of continuous operational collaboration between the new ISWAP leadership of Ba’ Lawan with the Abubakar Shekau’s main faction of Boko Haram Shekau. A battlefield synergy reported in the double Boko Haram ISWAP attack on Damboa road.

The trio- Albarnawi- Shekau and Ba Lawan have similar leadership and ideology although Shekau believes in localisation of Boko Haram.”

With the rains setting in and the possibility of hunger hitting the increasing number of the ISWAP young fighter, Albarnawi is being credited for coming up with the strategy of attacking villages and looting food items including livestock.

EONS Intelligence had in its analysis referenced sources who said ISWAP fighters “are directly responsible for stealing over 20000 cows within the past 21 days” around the northern parts of Borno. The report claims that “Some of the stolen cattle are currently hidden in a location given as Tunbum Allura.”

It is the take of The Humanitarian Times that though the Chief of Army Staff and his gallant troops may have unsettled the ranks of the terrorists during his recent exploits, the Nigerian forces must not let down their guards and watch Albarnawi, ISWAP’s chief advisor, to seal a peace deal with his former colleagues in the Abubakar Shekau led factions of the Boko Haram.

A divided force of Boko Haram is to the greater advantage of government forces than a united enemy.

The military must, find a way to wriggle itself out of its present labyrinths of its challenges to leverage on the present confusion in the ranks of the ISWAP and Boko Haram leadership to consolidate on the gains they had achieved, before the recent unfortunate setbacks.

Likewise the Nigerian government must provide all the necessary tools and welfare enablements to motivate the troops. For according to Napoleon Bonaparte, God is on the side of the best artillery.

So the Nigerian government must understand that it is at war with terrorists, and it must wage the war with severity; because that is the only way to make it shorter and consequently less human.

The Boko Haram insurgency is currently into its eleventh year since it began in June 2009 when a group of clubs, machete and hunting rifles-wielding Islamic extremist under the command of Muhammed Yusuf started a movement to replace constitutional democracy with Islamic Sharia rule.

The terror groups have killed more than 36,000 people and displaced over 2 million people with over 7 million others – mostly women and children in need of life-saving need.