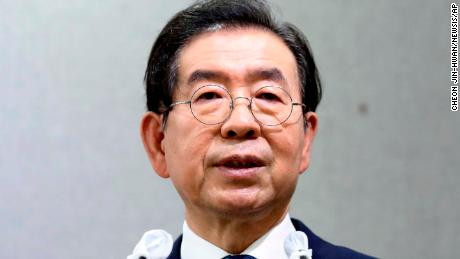 The Mayor of Seoul, Park Won-soon, long seen as a potential South Korean presidential candidate, has been found dead, police said Friday, July 9. He was 64.

Park’s body was found at Mount Bugak in northern Seoul hours after hundreds of officers started searching for him. He was found near where his phone signal was last detected.

No cause of death has yet been released.

His death comes after former Seoul City employee filed a police complaint — allegedly involving sexual harassment — against him on Wednesday, July 8. However, there has been no confirmation that this was a factor in his death

If it is established that Park killed himself, he would be the highest-profile South Korean politician to do so since former president Roh Moo-hyun, who jumped off a cliff in 2009 after being questioned over corruption allegations involving family members.

Park’s daughter reported him missing on Thursday afternoon, July 9, saying her father had been unreachable for several hours, police said. He left a message that sounded like “last words” and his phone had been turned off, she told police.

He did not show up for work on Thursday, cancelling a meeting with a presidential official at his Seoul City Hall office, Kim Ji-hyeong, an official from the Seoul Metropolitan Government, told the Associated Press.

Police officer Lee Byeong-seok told reporters that Park was seen by a security camera at 10:53 near the entrance to the wooded area where his phone signal was last detected.

Park earned a reputation as a workaholic boss, with reports saying a handful of civil servants at the Seoul city government had committed suicide due to work-related stress under him.

Earlier this week he courted controversy by being one of several senior Democratic party politicians to attend the funeral of the mother of Ahn Hee-jung, a former provincial governor convicted of sexual offences last year.