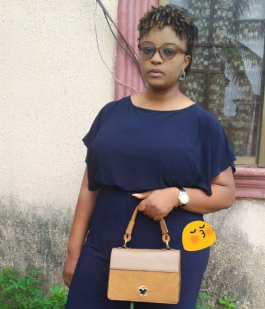 A Nigerian married woman has sent many people into panic after leaving disturbing posts on her Facebook wall.

Ifeoma Blossom Obiora took to her Facebook page on July 6 to leave two posts many described as suicidal notes. In one of the posts, she wrote

Nobody listened, Nobody cared” she wrote with a crying emoji

“In these moments before my departure, I feel more clarity than I have ever felt in my dull life. In one minute, I will be free from the voices, from the pain, and from you.”

A women-based non-profit organization, WomenAids Collective WACOL, who reached out to her, claim Ifeoma was married off at 15 and has been subjected to emotional and physical abuse from her husband, Onyebuchi Obiora, for many years.

Ifeoma is reportedly suffering from reproductive health challenges- Vesico Vagina Fistulae (VVF) due to forced sex. According to the group, men from the Anambra state police command were sent to rescue Ifeoma but when they got there, they began blaming her for going on social media to seek for help. They later left her behind with her ”abusive” husband.

The group hopes to go there today July 8, to rescue her.