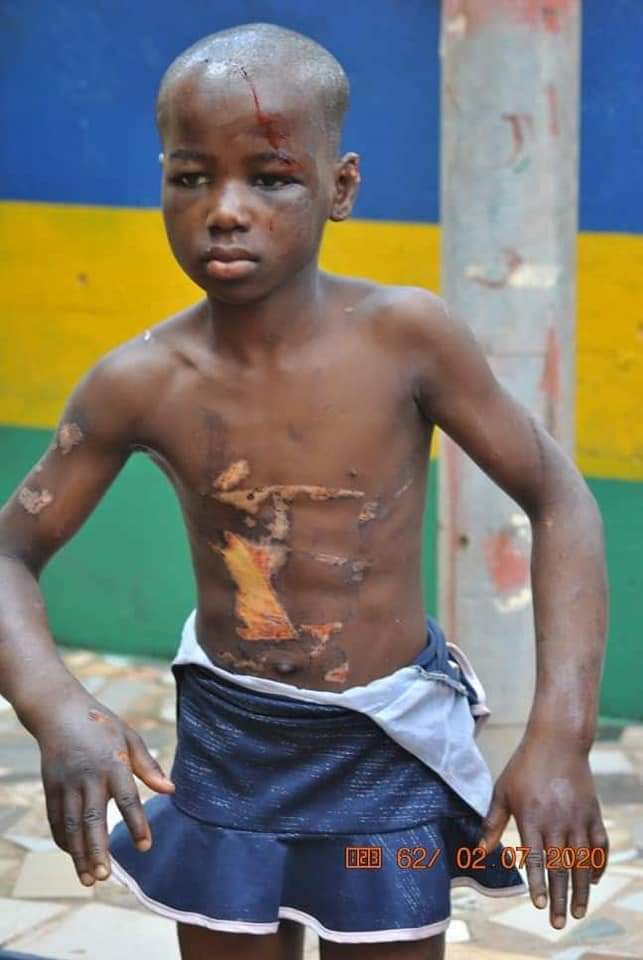 My fellow good citizens of Nigeria, this 10yrs old girl by name Nneoma Nnadi from Aku in igbo-etiti LGA,is a househelp to one Mrs ifeoma Ezia also from Aku but married off to Udi, the offense this girl committed is that she was carrying ifeoma’s lil baby around 12am in the midnight and slept off so the baby fell off her hands but without any physical or internal injury, what Mrs ifeoma did was to use hot iron and design her skin and also used big nail to puncture her head,she was instructed to wash plates few days after which is on the 2nd of July and bcos she was feeling so much pains,she couldn’t wash the plate as quickly as she was instructed and Mrs ifeoma got 3fat cains and unleashed horror on this girls body inspite of the iron soars on her skin already and inserted grinded fresh pepper into her vagina and then locked her up in the toilet,it was a neighbor that heard the girl screaming that rushed into their apartment and rushed the girl in the hospital.
The girl is at parklane hospital ,last floor at the maternity ward all her body is swollen beyond recognition,the woman in question is at AREA COMMAND ENUGU with her husband, but from observations they’re trying to cover it up and buy off the police while this girl is battling for her life with her poor mother who cannot feed twice a day with good good food bcos of how poor she is and she’s a widow.

Because she is poor a police woman is there in the ward with her and does not allow anyone take pictures of the girl or come close to see her,not even the girl’s family member else you’ll be embarrassed by her, the doctors are not giving her proper attention or medication bcos of money,they just dumped her there and used bandage to tie her head and pores are coming out of head already,the site of that girl is fucking disgusting. Now the girl’s family members are so scared bcos they don’t know whom to run to.none of her family member is allowed to see this girl

Pls tag NGO’s and human rights to this post for immediate help and response
Share to different groups bcos this girl did not wish for herself to come from a poor background.her mom fainted on seeing her daughter,pls help get justice for this poor girl and her mom