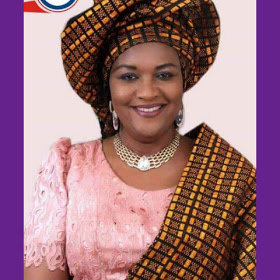 Political parties can be said to be the primary and most effective structure globally through which women become engaged politically. Nigeria has seen woman gradually taking strides in steering various leadership wheels.. We find women actively engaging in elections and winning regardless of the ‘ A woman’s place is in the kitchen’ ideology of the past. Thanks to former President Olusegun Obasanjo who made it a point of duty, to include women actively during is tenure and this inclusion has continued till date.
Today I  x-ray APC’s Princess Folasade Olabanji Oba, the National Deputy Chairman (Association of Local Government Vice Chairmen of Nigeria) and  Vice Chairman Ikorodu local government.
Who Is Princess Folasade Oba?

Some refer to her as mama boys, a woman passionate about the welfare of the people around her community and beyond…   She is also fondly  known as Beyonce or Iya youths amongst her political peers due to her fashion and beauty sense and love for Women and Youths. Princess Folashade decided to return home upon realising the need to be near her aged mother and father due to health concerns. It is Interesting to note that her mother is none other than  Alhaja Chief S Atinuke Olabanji Atobajaiye (Majayalolo).  She was Iya Sunna General.Known to be contemporaries with Late Alhaja Mogaji the former Iyaloja General  and mother to former governor of Lagos state Sen( Dr )Bola Ahmed Tinubu (Jagaban Borgu)
While taking care of her mother who eventually died five(5) years ago, the Princess ventured into politics in 2003 out of love for her community, knowing the need for good hands on board to make Ikorodu Oga better than she met it.

Over the years she has taken up various party posts and starting from the bottom up.. She is known to be a strong party faithful of the APC …One will wonder seeing her in action as she ordinarily strikes one as a sweetheart and softie but definitely sure has a high tenacity.

So compassionate and in-tune with the needs of the people and her community, she started her NGO ‘Shelter of Grace’. Shortly after arriving  back to Nigeria Shelter of Grace has continued to help serve the nation. She says that there is no nation above the nation of Humanity for this cause she has dedicated her forever service to…especially during this pandemic with support and  palliatives, which is very much on-going till date. It is the People’s project…The people  must win… Their needs and welfare must always come first ..
Princess Folashade is very much respected due to her down to earth personality. A woman who effortlessly bends in adaptation to any situation  presented to her. She is a true progressive.

It is a common saying in the corridors of politics that her personality, zeal , passion and hardwork is a plus in today’s politics as it is  not just business as usual.

When asked for  her advice to women and those intending to join Nigerian politics, she said  “Women should occupy their place. Women are meant to be Nurturers, Teachers, and helpers of great destinies of the Nigerian child and we are Nation builders. We should give the best of us always.. Further stating that Character, fear of God and integrity should be our foundation essentials.