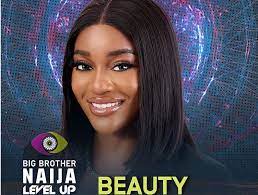 Beauty, a Level 2 housemate on the current season of Big Brother Naija on television, was eliminated from the competition on Sunday.

After the party on Saturday night, Beauty misbehaved by breaking the house rules while intoxicated.
Biggie, the coordinator of the show, said the decision was based on her disrespect for the house rules and creating an inhospitable space for fellow housemates.

According to Biggie, these two occurrences fetched her one strike each with another strike she bagged in the previous week when she charged at a fellow housemate, Ilebaye, throwing an object at her.

Beauty got three strikes in all, for her misbehaviour which got her disqualified from the show.

Beauty from Taraba upon arrival at the Big Brother Naija show, on July 23, said she hoped her authenticity and her strategy to “go with the flow” would carry her to the end but unfortunately, she could not make it to the end.