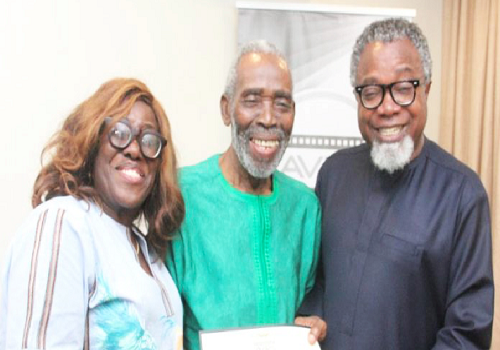 FastNews reports that Ageless actress Joke Silva, who is also the wife of legendary actor Olu Jacobs, has endorsed the Audio-Visual Rights Society of Nigeria (AVRS).

After paying a courtesy call to the power couple in the entertainment industry at the Glover Memorial Hall, the stunning actress declared her willingness to support the only government-licensed collective management organization for audio-visual content.

To honor and celebrate Olu Jacobs, who recently turned 80, the board members and executives of AVRS, led by the chairman Mahmood Ali-Balogun, paid a visit to the Jacobs.

Ali-Balogun presented an icon award and a cheque of N250,000 to Olu Jacobs as well as membership certificates to both Jacobs and Joke Silva.

The AVRS chairman further said the Octogenarian actor deserved the award for his meritorious contribution to the development and growth of the audio-visual industry in Nigeria and for fostering the finest ideals of the acting profession.

Responding, a visibly elated Olu Jacobs thanked the AVRS leadership for the honour as well as the membership extended to him and his lovely wife saying, “the only thank you that is big enough to appreciate the AVRS for this honour done me is to say a louder thank you. Thank you AVRS.’’

In her response to the honour bestowed on her and her family, Joke Silva said, “Thank you so much for coming, there are several things that have been said which include films but most importantly that theatre must not die and that is one of the reasons we fought very hard to get the Glover Hall memorial and we thank God that we were able to. At the end of the day, they gave it to us. And on the advocacy of AVRS, I would like to start there.

“I am beginning to realise that maybe the direction we need to go is not just about what the actors guild does but to channel or probably get all the bodies together including AVRS. You don’t need to ask me to become an advocate for AVRS because celebrating my husband and I is enough to become an advocate after accepting us as members because it is absolutely important.

“I know of the journey that we had gone through and if an AVRS had been standing long before now, the journey wouldn’t have been this hard but hey we thank God that in His mercy, we didn’t go cap in hand but it was hard and we are grateful for it. We also know that not everybody had or has that luxury or are so opportune, so this is where AVRS comes in and we must be able to stand and say that this is what AVRS stands for, this is what all the bodies need to do, so you are going to educate me very well so that I become an absolutely knowledgeable advocate because I understand very much the need for AVRS.

So, I thank you all very much for making us members, the time has come where we all need to take it seriously and it’s incredible the kind of people who are on the board.”