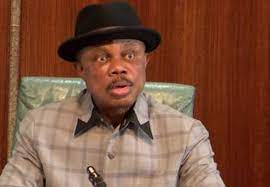 The EFCC has denied that Willie Obiano has been released.

FastNews reports that the Economic and Financial Crimes Commission has disputed rumors that Willie Obiano, the former governor of Anambra State, has been released.

On Friday morning, it was widely reported that Obiano, who was arrested by the anti-graft agency last night, had been freed following questioning.

POLITICS NIGERIA, on the other hand, discovered that this was incorrect. Wilson Uwujaren, the EFCC’s Head of Media and Publicity, told our correspondent on Friday morning that the former governor was still in their custody.

“He has yet to be released. It’s phony news. He is in our possession and being sent to Abuja “, he revealed.

Obiano was arrested a few hours after handing over to the new state governor, Charles Soludo. He was intercepted at the Murtala Mohammed airport in Lagos on his way to Texas, USA around 8:30 pm on Thursday.

A reliable source who pleaded anonymity disclosed that Obiano is being investigated for fraud and embezzlement of public funds.