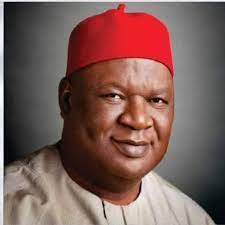 Pius Anyim in the 2023 Presidency

Similarly, Senator Enyinnaya Abaribe, the Senate Minority Leader, has expressed support for the former Secretary to the Government of the Federation, SGF, claiming that he is eminently qualified and intellectually endowed to fix Nigeria.

The duo, who spoke at Senator Abaribe’s grand civic reception in Obingwa, Abia State, where Anyim was a special guest, urged Ndigbo and Nigerians of all races and political stripes to support the former Senate President.

This is as the PDP candidate in the just-concluded governorship election in Anambra State, Val Ozigbo has called for the inclusion of electronic voting in the Electoral Act.

Ozigbo who spoke with Vanguard during the reception expressed disappointment over President Muhamnadu Buhari’s refusal to assent to the New Electoral Act.

He said that the hidden reason for the President’s action was the electronic transmission of election results included in the document and not the direct primaries as being cited by the Presidency.

He argued that “if money could be electronically wired in Nigeria, why can’t we go beyond manual voting and adopt electronic voting as other democracies in the world?.

” The deployment of 34,000 police personnel to Anambra because of governoship election would not have been necessary if we adopt electronic voting”, he said.

Senator Wabara said Anyim had garnered the capacity, the requisite knowledge and national appeal to deliver as President.

According to Wabara, Anyim’s political antecedents and the prevailing peace and tremendous achievements that characterised his tenures both as the Senate President and SGF “leave no one in doubt that Nigeria needs a true and competent patriot like him to move forward”.

Senator Wabara urged Nigerians to give Anyim a chance to return Nigeria to the path of greatness.

Similarly, Senator Abaribe who extolled Anyim’s leadership qualities, his candor, political maturity and wealth of experience, described him as one of Igbo’s first eleven that has all it takes to rescue and calibrate Nigeria.

He solicited the support of all progressive Nigerians irrespective of their political leanings for Senator Anyim who he said is divinely endowed and strategically prepared to give Nigeria a new hope.

The event almost turned into a political carnival for Anyim and Abaribe as various speakers rooted for them to the admiration of the mammoth crowd.

Senator Anyim had during a remark commended the Ngwa nation for honouring Abaribe with the chieftaincy title of “Maduforo Nde Ngwa”, describing him as an irrepressible voice at the senate.

He said that Abaribe could be trusted with any higher responsibility while appluading him for standing firm for justice and equity.

Senator Anyim has since declared interest in the 2023 presidential race, saying he could be trusted for the political and multi-sectoral salvation of Nigeria.