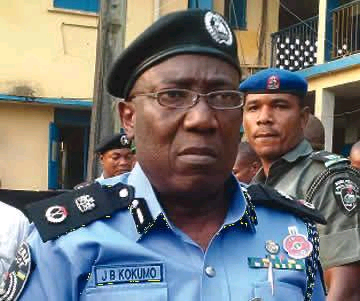 The former Commissioner of Police, Edo State who was recently promoted to the rank of Assistant Inspector-General of Police and redeployed to Abuja as the Assistant Inspector-General of Police in charge of Federal Operations at the Force Headquarters, AIG Johnson Babatunde Kokumo has been announced to take over the saddle of AIG Zone 2 (comprising Lagos and Ogun) from AIG Ahmed Iliyasu who retired today after attaining the age of 60. This new development in leadership of Zone 2 in the police structure takes immediate effect.

The new AIG of Zone 2, AIG Johnson Babatunde Kokumo enlisted as a Cadet Assistant Superintendent of Police (ASP) into Nigeria Police Force (NPF) on the 15th of March, 1988. He is an Alumnus of the prestigious National Institute for Policy and Strategic Studies (NIPSS), Kuru, Jos. In the course of his towering career, AIG Kokumo has also attended Mobile Police Squadron Commanders Retreat Workshop on Human Rights Trafficking and Forensic Science and Senior Executive Course 41, 2019 at the National Institute for Policy and Strategic Studies (NIPSS). He is also a member of The International Association of Chiefs of Police (IACP).

He obtained his first degree from the Department of Sociology, University of Maiduguri, Borno state, and then proceeded to the famous university of Lagos for his post-graduate studies where he obtained a Master of Science in Sociology with specialization in Criminology. After which he proceeded to gathering other certificates, and attended various seminars.

AIG Kokumo recorded great success as an Operations Officer at the Lagos State Command, during the reign of terror of a notorious armed robber, Sina Rambo. He was once a Teaching and Directing Staff at the Police College, Ikeja. He was a Divisional Police Officer in both Lagos and Ogun State Commands, Squadron Commander, NO 16 PMF, Abeokuta, Ogun State, during the reign of terror of notorious Amani Tijani- a cross-border bandit.

It is expected that the Alimosho-born Police boss will bring his local knowledge of the terrain and his vast experience gathered over years into battling crime in Lagos and Ogun states.