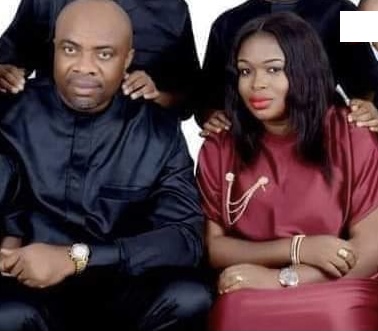 Mrs. Ikpor, a mother of four, told newsmen in Port Harcourt that the husband is under a spell apparently cast on him by the mistress.

She alleged the mistress deceived him to abandon their 17- year- marriage without any known issues between them.

The heart broken wife accused her husband of holding a secret traditional weddding in a hotel in Umuahia, Abia State where the alleged mistress hails from.

She said the mistress in question is pregnant for her husband.

But contacted by The Nation, the bank manager said he has been separated from the estranged wife for over two years.

The wife, he said, has their only daughter while the three boys are with him.

The wife was seen in a viral video fighting with the alleged mistress in the husband’s office before security guards intervened.

He said: “The video about this matter has gone viral in the last two three weeks and she has also done press statement and sent out, I have refrained from making comments because the matter is in court.

“I am aware that concerned friends and citizens have made response directly on those issues. The fact is that my children are involved in this and I try to maintain some level of privacy for my own sake and that of my children.

“I do not think this what I should be stating on the social media at the moment. My first son is 15 and he has told me that he is not happy with what is going on and I should make sure I do not join issue with such, and that is where I stand in this.

” If she knows the appropriate way to do things, I do not think what she us doing is the right thing but she should know that a man in my level is not a mad man to wake up to do all those things.”

“Whatever petition she is sending to anyone, the truth is that I have seen worse than that on social media, just like I said earlier, I refrained from making comments on this, because I believe it is not the appropriate thing to do.

“We have separated for more than two years now but she still lives with my daughter. I am not going to say anything further on this until all issues are resolved. I do not see this as the best way to go about it, but since she thinks it is for her, I wish her the best.” he concluded.

However, Mrs. Ikpor maintained the matter is not yet in court because she has not been served any summons.

She narrated how the affair between her husband and the alleged mistress started.

“It all started when the woman came to do one year Industrial Training (IT) with the branch of the bank the husband heads.

“Friends and relatives of the family used to inform me of the closeness of the woman to my husband and their movements in hotels and other places but because of the level of trust I had in my husband, more so a serious Christian, who preaches on the pulpit, I refused to either believe them (rumour mongers) or confront him with any of those.

“One day I overheard my husband calling one of my uncles that works with NYSC here in Port Harcourt to plead on the girl to be posted to Rivers state for her youth service and my uncle asked him what his interest was in the girl that he made such request. I realised that it was not actually what I think

“One day my daughter felt sick I took her to hospital and before we came back my husband had changed all our house keys and locked up my three other children in a room upstairs.

“He left to God knows where, switching off his phones, efforts by our Pastor to intervene in the matter failed because he could not be reached.

“I thought of breaking the keys because my children were crying upstairs and all that but Pastor called me to say I should not break the doors and I stopped.

“I cannot pinpoint what actually the problems were. Before this time we were living happily. I supported him in thick and thin.

“There were no problems and with God on our side and prayers, he rose to where he is now and now this. I know that my husband is under a spell of the woman and unfortunately her parents are supporting her in this.”