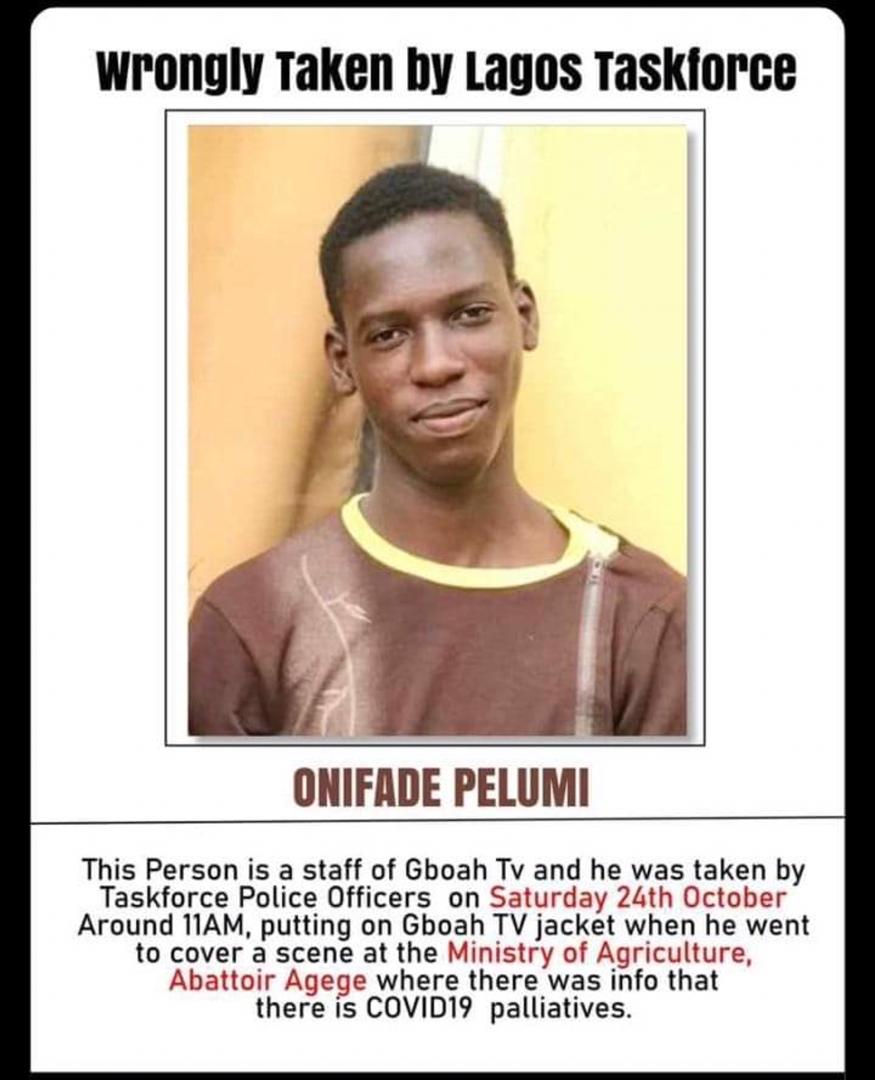 More details have emerged on how officials of the Nigerian police attached to the Lagos State Task Force, on Saturday, October 24, killed a 20-year-old journalist, Pelumi Onifade. His body was dumped at the mortuary of the state’s general hospital, Ikorodu.

Mr Onifade, a 200-level student of the Department of History, Tai Solarin University of Education, Ijagun, Ogun State, was an intern with GboahTV, an online television.

On the fateful day, he was said to have joined one of his colleagues to cover an attempted burglary by hoodlums at a government facility at Abattoir, Oko Oba area of Agege.

But the police officers, who were drafted to the scene, engaged the hoodlums with firearms, injuring a number of them, and arresting some.

Mr Onifade’s colleague, whose identity was not given for security reasons, told the television station management that he saw his colleague, who was already shot, as he was dragged into the police van alongside others.

“He was shot despite the professional jacket he wore. His colleague even approached the policemen that Onifade was his colleague and showed them his own identity card, a camera and other gadgets. But rather than listening to him, they threatened to shoot him and got him arrested too,” a member of the station’s management told .

Following the shooting of protesters against police brutality on Tuesday, October 20, at the Lekki tollgate, widespread violence and looting had broken out across the state with hoodlums taking advantage to loot both private and public properties.

How police deceived us –Witness

According to another source, as soon as the television management received the information it sprang into action, and combed everywhere in search of the young man who was described as a conscientious firstborn and breadwinner of a family of five.

Mr Onifade’s father was said to have been involved in an accident which partially crippled him and made it difficult for him to work.

“His mum helps caterers to cook at parties. So things are a bit difficult for the family but the young Onifade had been up and doing. His two younger sisters are still in secondary school,” the source explained.

The source added that the search team visited hospitals, police stations, prisons and particularly, the taskforce command located in the Bolade area of Oshodi.

The source said; “A thorough search was conducted from police stations to prisons and all over Lagos State for four days (Saturday, October 24 to Tuesday, 27), after which a ‘Missing Person’ graphic was shared across all social media platforms to aid his search. That same evening of Tuesday October 27, an officer of the task force called, saying he saw the post, and agreed to meet us on Wednesday, October 28, at the state headquarters, Ikeja.“At the meeting, the officer that led the squad said they arrested five people at abattoir in Agege, but that one person died. He said they already took the corpse to a mortuary in Ikorodu. They scheduled a meeting for Thursday to confirm if his name was on the list of those arrested, and that if not, we would follow them to the mortuary at Ikorodu to confirm. But due to the public holiday on Thursday the appointment was rescheduled for Friday. On Friday morning we got to Ikorodu, and behold, it was Pelumi Onifade’s corpse that we saw.”

Speaking on the phone with our reporter, a co-owner of the television station, Joba Bamiro, confirmed the development. He, however, declined further comment on the matter, saying the company’s management was not prepared to speak “for now.”

A pastor at Faith Christ Church, near Abule Egba, where the late journalist attended, said a proper complaint has been lodged against the men of the task force at the police headquarters in Lagos.

The pastor, who also declined to give his name, said everyone involved in the matter has decided to keep their identities secret for fear of possible attacks by the police.

He said; “We were we with the police yesterday to make an official complaint. They promised to investigate the matter and get back to us.“We said autopsy must be carried out and we’ve also put it to them that police that we are writing the IG, and the governor. They lied to us until we discovered his corpse in Ikorodu. They killed him at the abattoir and we discovered his corpse in Ikorodu. They have a serious case on their neck.”

Since the deceased was declared missing, had inquired from relevant police authorities but none gave any information.

The commandant of the taskforce, a deputy superintendent of police, Olayinka Egbeyemi, told our reporter on October 28 that only the state’s police public relations officer, Muyiwa Adejobi, could comment on the matter.

However, consistent messages seeking details of the whereabouts of the late journalist were unanswered by the PPRO.

Out of the many questions concerning police activities in the state that were sent to Mr Adejobi by our reporter on October 28 via his WhatsAPP, only the one involving the whereabouts of the deceased was left unanswered.

On Monday evening, another message was sent to Mr Adejobi to clarify the allegation that the deceased was killed by the police, and in spite of evidence that he read the message, there was yet no response.

Meanwhile, when called on the phone on Tuesday morning, the spokesperson for the task force said he could only refer to Mr Adejobi for an appropriate response.

“Please, I will have to refer you to the PPRO for a response on this matter,” Mr Adebayo said.

Meanwhile, a statement circulated on social media by friends and colleagues of the late Mr Onifade has called on appropriate authorities to ensure that justice is served.

They said the young man was the hope of the family, and that cutting his life short could be too devastating for an unhealthy father, and a struggling family.

A copy of the statement, which was made available to , reads in part; “We are not against the police, police reform is a fight in this country. At age 20, Pelumi Onifade was the breadwinner of his family and a responsible member of the boys’ brigade in his church.

“We, therefore, demand that whoever pulled the trigger must be identified and prosecuted accordingly. And in the absence of the culprit, the person who led the squad must be held responsible and prosecuted. The family of Onifade Pelumi should be compensated, and a public apology from the Lagos State government and the police must be tendered.”

One of the sources who spoke to our reporter on the phone said the police said the body would be released as soon as the autopsy is conducted and the result is out.

Backed by the Lagos State environmental sanitation edict (1991), the then military administration in the state announced the establishment of Lagos State Environmental Sanitation Enforcement Agency otherwise known as task force, on November 4, of the same year.

In 2003, the responsibilities of the task force was reviewed through the Cap E6 Law of the Lagos State Government.

The new roles, according to the law, include the regulatory power to, among others, arrest and prosecute, street traders, roadside mechanic operators, hawkers of uncensored films, medical quacks and dwellers of shanties across the state.

The state’s road traffic law of 2012 further empowers the task force to prosecute traffic rules offenders. And since the creation of the Kick Against Indiscipline (KAI), an agency in the state’s ministry of the environment, the task force has had a partner to operate with.

However, over the years, and especially since the appointment of Mr Egbeyemi as the chairman of the task force, residents of Lagos have continued to complain against what they tagged human rights abuses and corrupt practices by men of the unit.

A Lagos-based journalist who craved anonymity, had on October 8, reported the task force to fellow journalists via a WhatsApp platform. He said he was extorted by the task force, and narrated how fines paid by traffic road offenders are reportedly diverted to private pockets.

Meanwhile, on October 15, a call for the disbandment of the task force was issued by an anonymous group, which accused the agency of lawlessness, rascality and corrupt practices.

The message which went viral was headlined; “Deadly as SARS, Olayinka Egbeyemi-Led Lagos Task Force is Another Monster That Should Be Disbanded.”

It reads in part; “They are laws unto themselves. The vicious and monstrous Lagos State Task Force led by DSP Olayinka Egbeyemi is another monster like the disbanded SARS. They operate with impunity, arrest motorists indiscriminately mostly without any offence but just to extort.

“They are armed to the teeth and often threaten with guns and knives under the directive of a recalcitrant commandant. They are quick to hijack steering from alleged traffic offenders and chase the owners while they drive away the offender’s vehicle without allowing the victim to pick any of their personal effects. You dare not try to film the harassment and intimidation. You might not live to tell the story. They are that deadly. Lagos Taskforce is the twin brother of the dreaded SARS.”