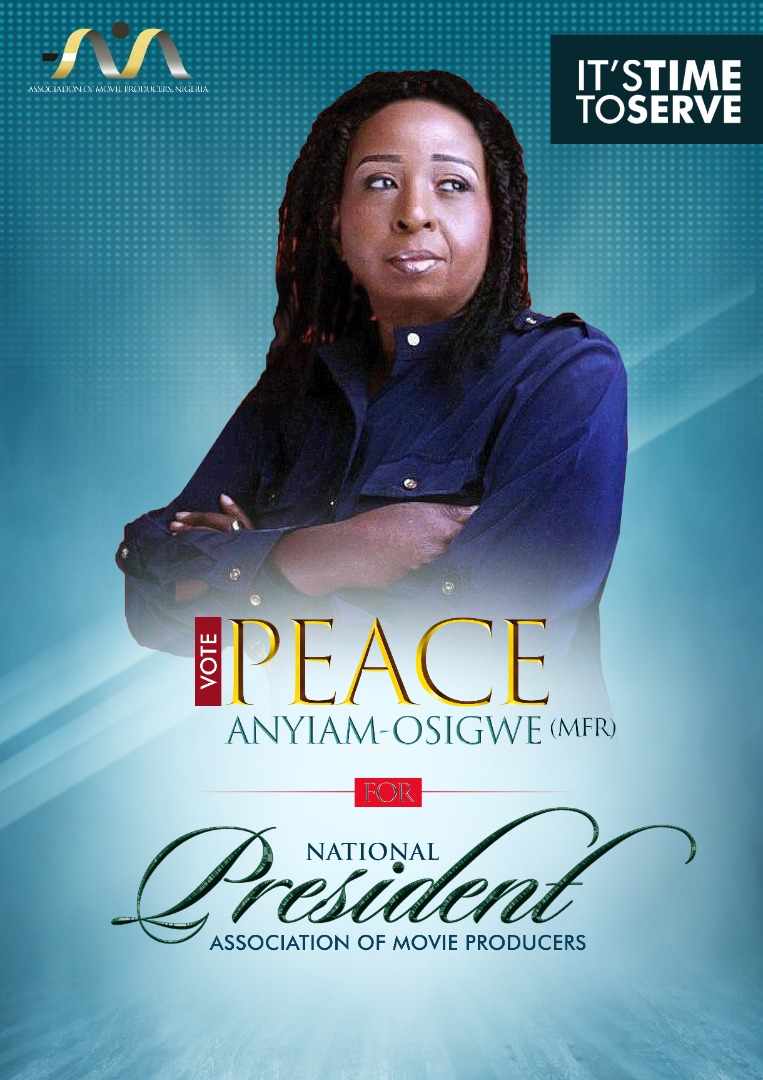 Peace Anyiam Osigwe  has emerged as the President of Nigeria’s Association of Movie Producers, AMP.

Her emergence followed an election which  held on Saturday, August 29 in Asaba, Delta State capital.

A statement signed by Favour Benson and made available to newsmen says the election held successfully and was  rancour free.

Specifically, Osigwe promised to  institute an archiving mechamism on both local and international knowledge sharing platforms like IMDB. The IMDB will recognize each movie, the cast and production crew.

The mechanism, she said, would be a robust process of recognising Nigerian movies at top level during particular theme search. This has the potential of not only archiving Nigerian content, but also opening it up to a wider audience.

She added that Governor Ifeanyi Okowa of Delta State supported the association with everything possible for a hitch free election.

According to Favour Benson “We thank everyone for mature and professional conducts during the Association of Movie Producers election on Saturday. We thank our Executive Governor Ifeanyi Okowa of Delta  State, who was represented by Engineer Lawrence Ejiofor- Commissioner for Culture and Tourism, for his supports.

We also thank Chairman, AMP Board of Trustees,  Chief Zeb Ejiro for his fatherly role in the process and Ralph Nwadike, immediate past President of the association .

Our thanks extend to the association’s electoral body, AMPEC and Delta AMP members including past Presidents of our great Association,  Mr Madu C Chikwendu,  Paul Obazele , Zik Zulu,  Mr Foster for their wonderful supports,” she said.

In her statement, the new president, Peace Anyiam Osigwe  vowed to take the association to the next levels.

She said: “The new administration I lead will attract government institutions and corporate actors to invest in the film industry. It will also create training opportunities for young film makers.”

She added that “We will protect the rights and opportunities of local movie producers including safety and security of workers within the industry. Our plans to  utilise the vast varieties of technology in films production would project  and recognize each movie on international platforms,” she promised.

Further on her agenda, Osigwe said, “We will improve the skill set of producers and push boundaries by laying  ground works on  how to integrate film and theatre into the education system at an early stage. This will include developing a training guide for  quality documentaries, dynamic Africa action movies through an administrative policy of  inclusiveness in scouting for movie producers and script writers.’’

Meanwhile, Favour Benson has urged Nigerians to disregard the fake news from the illegal arm of the association in Lagos on Saturday. The Lagos statement stated that AMP election had been postponed.

Benson said “It is trash.”