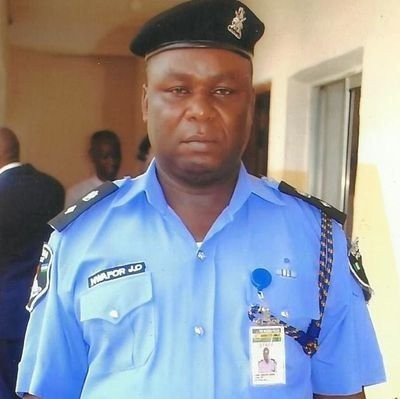 A Nigerian lady has called out an Anambra Policeman allegedly responsible for her brother’s disappearance after finding out that he is on Twitter.

In tweets @Ada_mummyya shared, she alleged that CSP James Nwafor is responsible for the dumping of over 100 dead bodies of young men in Ezu river at the borders of Enugu and Anambra in 2012.

She also disclosed that the policeman who first denied arresting her brother, later admitted killing him and told her parents to do their worst.

Today, I found out @CspJamesNwafor the man responsible for the disappearance (or possibly death) of my brother is on twitter. This beast kills for fun and claims he’s untouchable. @anambrastate_ and @GovObiano  must stop protecting this man so he can pay for his crimes!

He claims that nothing can happen to him, he was responsible for dumping over 100 dead bodies of young men in the Ezu river at the borders of Enugu and Anambra in 2012. Had my father swimming in a river filled with dead bodies to see if he can find his son!

This man denied ever arresting my brother and while my parents were leaving his office, they saw him being led in and my parents identified him immediately. This man ordered that my parents be pushed out of his “compound”. Why lie?

The next day this animal tells them point-blank that he had killed my brother and that they should do their worst! My mum collapsed immediately and was rushed to hospital, this animal deserves death!

The scam started from there, lots of people told us he was bluffing and that we should bring money, we sold lands to pay for his release and he kept upping the amount! We went to the commissioner of police Anambra state who said his hands were “tied”

The few people that ever left that cell said they saw my brother, we don’t know how true, we were willing to pay anything but this animal frustrated us, the human rights guys we met in Anambra (maybe works with him, I don’t know) scammed us too.

However as long as I live, this man must answer for my brother’s whereabouts one day! He must answer and that day will be soon. I won’t relent or rest. Dead or alive, he must give us answers.

Again I repeat, @anambrastate_ and @GovObiano should allow justice to prevail! Stop shielding @CspJamesNwafor ! Let him answer for all the people he has killed in Awkuzu SARS! Let him give account of his abuse of office and power!