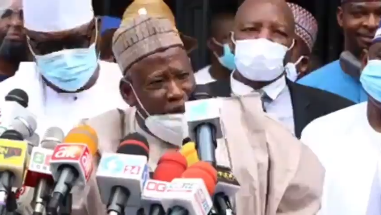 PDP has blasted Kano state governor, Abdullahi Ganduje, who today said the party made Governor Godwin Obaseki its flagbearer for the September 19 Edo state governorship election because they are only interested in the state’s treasury.

”The PDP decided to accomodate our former governor in Edo state, not because they have anything in common or share some ideological feelings but simply because he is managing the treasury of Edo state”

In a statement released by its spokesperson, Kola Ologbondiyan this evening, the PDP described Governor Ganduje as a treasury looter who has no moral rectitude to speak on corruption. The party said it is a huge irony that Governor Ganduje, who has ”earned himself the disgraceful public sobriquet of “gandollar, after being caught collecting gratification, would attempt to accuse others of having intention of looting the treasury of a state.”

The statement in part reads

It is a paradox that an individual who has earned himself the disgraceful public sobriquet of “gandollar”, after being caught collecting gratification, would attempt to accuse others of having intention of looting the treasury of a state.

The PDP points out that it is only in a party like the APC, under a Buhari Presidency, that such a tarnished individual can be selected to speak in public, let alone lead a governorship election campaign.

Apparently, Governor Ganduje and other APC leaders are so used to looting public treasuries that such is his first mental direction after his inauguration to lead the Edo governorship campaign.

Governor Ganduje has further confirmed the real intention of the APC, which is to use their morally embattled candidate, Osagie Ize-Iyamu (of course, birds of the same feathers flock together) for their desperate effort to regain access to Edo state treasury, after Governor Godwin Obaseki liberated the state from the stranglehold of APC treasury-looting godfathers.

Our party invites Governor Ganduje to note that there is no free dollars for him and other APC leaders to loot in Edo state. Under the PDP, the resources of Edo state, and indeed other PDP states, belong to the people and not to any political cabal and their godfathers. Of course, this is why the people of Edo state are solidly behind Governor Obaseki for firmly resisting APC looters. Moreover, Governor Ganduje, with his infamous “gandollar” video, is no match to the Chairman of the PDP National Campaign Council for the Edo election, Governor Nyesom Wike.

Whereas Governor Wike is a highly respected, upright, honest, transparent, people-based and development-driven leader, who is firmly in touch with the people of Edo state and enjoys their confidence and trust, Governor Ganduje, on the other hand, represent a leadership that is fraught with dishonesty, corruption, non-performance and public shame.

The PDP therefore counsels Governor Ganduje and the APC to quietly perish the thoughts of looting Edo state treasury like they are doing in APC controlled states, as the people of Edo state will humiliate them in the September 19 election.”